Will you be an evil or benevolent deity?

That's the choice you must make upon returning to a warring land in Black & White 2. Like its wildly successful predecessor Black & White, the sequel is all about moral choices.

The land, however, has transformed itself. The inhabitants of this breathtaking 3D world have lost their innocence and developed new weapons and technology. As you enter this warring world, will you make tribes coexist peacefully; encouraging villages and towns to grow into sprawling metropolises, or prompt them to inflict their will upon others by, creating and commanding large armies that seek to dominate and conquer?

Creatures in the game have grown too. They can learn strategies, master new abilities and skills, lead armies into battle and be your ultimate unit. Black & White 2 includes other new elements, such as improved graphics and miracle effects such as rivers of fire and earthquakes that yield massive destruction.

Every choice you make will have an impact. Each action and inactions prompts obvious changes to buildings, flora and fauna, all morphing to reflect your personality. 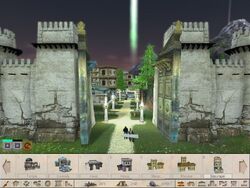 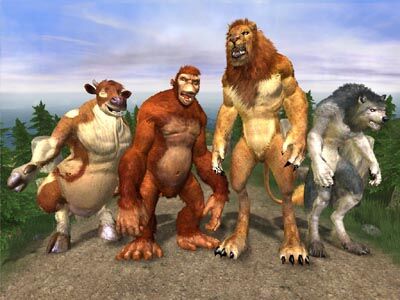 The creature choices include the Monkey, Cow, Lion and Wolf. All of these are available to play, except for the Tiger which is only included with the pre-ordered or collector's/special edition of the game. The Tiger is also available in the Battle of the Gods expansion pack. It (in the collector's/special edition of the game) can be spotted behind the other four creatures during creature selection. Contrary to popular belief, the Tiger is always available, provided the player has used the unlocker in the collectors edition.

The creature is usually referred to as "he" - not only by fans, but the consciences say it.

Unlike Black & White, in which the creature had to be taught miracles through repetition, this sequel allows the player to 'buy' Creature Miracles with 'Tribute' currency. Along with this, Black & White 2 allows a player to revisit everything they've taught their creature in order to alter and fine-tune it at any time, while the original Black & White simulated a more realistic teaching by only allowing changes to be made as the creature repRecommended System Requirements
Processor: 2.4GHz
RAM: 1.5GB
Graphics: 256MB
Mac OS: 10.5
Hard Disk: 5.1GB
Drive: DVD
Input: Multi-button Mouse


This game does not support GMA graphics cards with shared RAM.


Designed for Intel processors only.