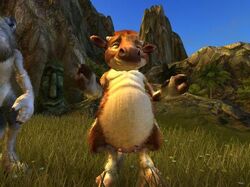 The cow is a good entertainer and the most friendly creature. He is decently intelligent but can lack brute force in a fight. The cow generally sways more to good rather than evil.

Note: As a fighter against creatures, the cow has the most powerful move (the tiger has the same move, monkey's is weaker. i didn't see the wolf use such move at all): a body press that can be used either from afar, right at the start of the fight when you're stronger (seems like it depends on strength, combat skill, current hp, and possibly size and weight), or after he throw his enemy on ground (uppercut with head). Think of making him develop his strength, as he'll almost never do it by himself. The body press doesn't require any upgrade to warrior skill to be triggered, but the attacks following it will do more damage with upgrades.